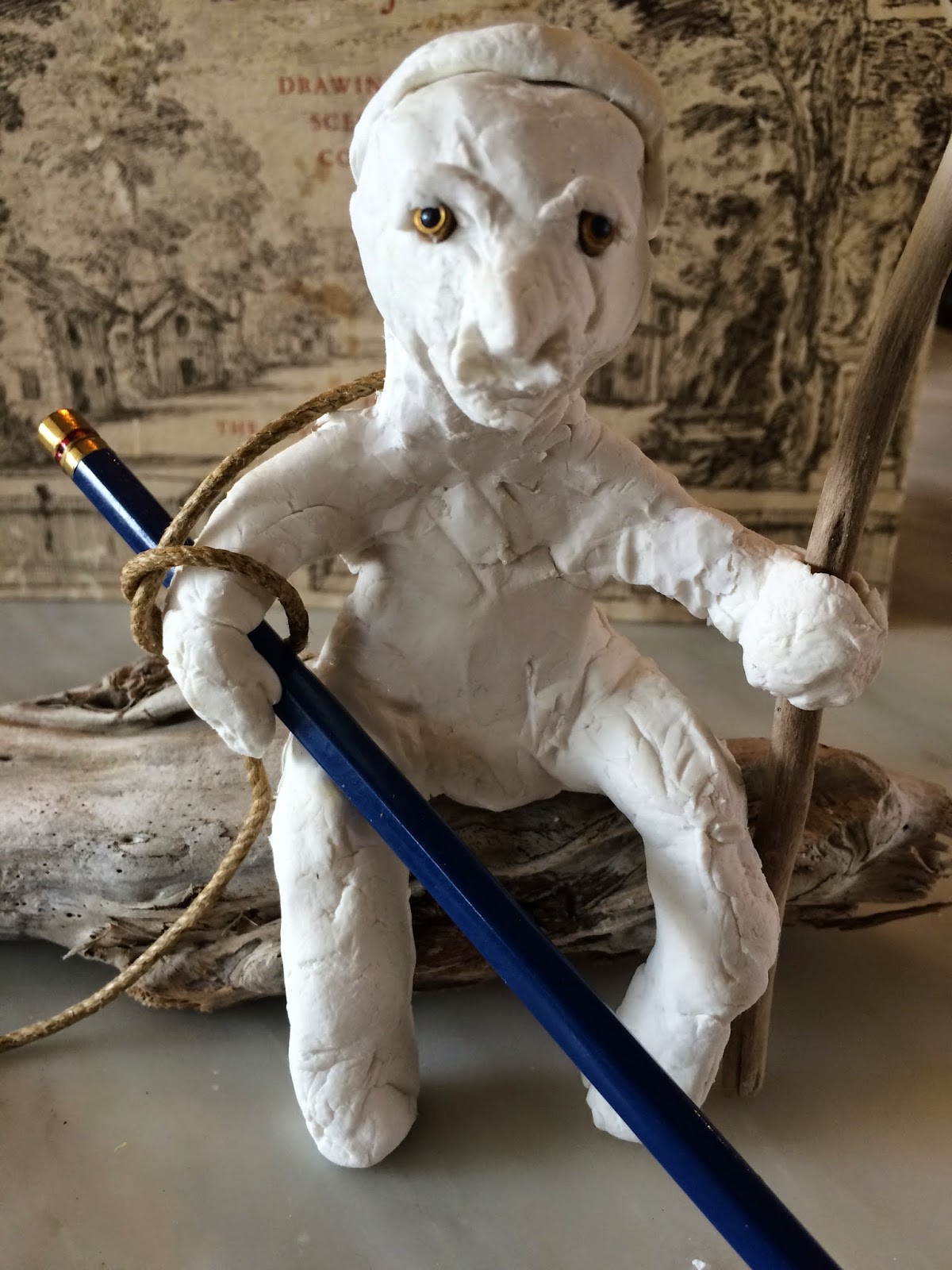 The pencil is lassoed to his hand so that it might dry in place. The sculpting material wasn't actually for me, but purchased a few years ago for lessons I was giving (it's quick drying, from the Netherlands). The driftwood is from Oregon, perhaps near Bandon (not the links but the older simpler town part, which is fresh).

As all of this terrible business has gone on in France, my thoughts have gone again and again to a chapter in Alain de Botton's work Status Anxiety. It's entitled "Art." If you are so inclined, I recommend reading it.

A friend's recent note mentioned that she liked words I'd posted a few days ago, the "how would they make a toy with no instructions, no wrong way to do it, and only the materials at hand?" bit. She wrote: "But what if we approached more of our projects with that attitude? So much could happen. I need to apply this to my life." (Btw, she publishes a brilliant travel blog.) I replied- something about not being afraid, and how that is a hard place to get to. Well, can I tell you something? Every post I put up lately makes me at least a bit afraid. Sometimes more. (And Thea thank you & I owe you a note, your mail made my day.) There's no road map, and I'm still scratching my head over the appearance of dolls. It's all so soft, I suppose. In this world, we are not really supposed to be soft and admit it, are we? Hard and clean and bright. Clear and concise. The soft world is not easily navigated. It's -- well, it's squishy. Neither here nor there. Primordial. Intuitive.

Which brings me back, sort of, to de Botton, the role of art, and going out on a (pear-tree) limb.

In Status Anxiety, de Botton examines the role of satire and caricature in 19th century France. Note, if you will, that the Frenchman Charles Philipon spent two years in prison for drawing the monarch as a piece of fruit: he drew a cartoon of King Louis-Philippe as a boated pear. As de Botton points out, the French word poire, which means "not only 'pear' but also 'fathead' or 'mug', neatly conveyed a less-than respectful sentiment regarding the monarch's administrative abilities."  In the same vein, we find that Napoleon, in 1799, ordered the closure of every satirical paper in Paris, because "the most powerful man in Europe ... would not tolerate cartoonists' taking liberties with his appearance."

This freedom of expression was not a "falling off the log" thing for the French.


"The most subversive comedy of all may be that which communicates a lesson while seeming only to entertain. Talented comics never deliver sermons outlining abuses of power; instead, they provoke their audiences to acknowledge in a chuckle the aptness of their complaints against authority," writes de Botton.

He goes on to say this:

"Furthermore (the imprisonment of Philipon notwithstanding), the apparent innocence of jokes enables comics to convey with impunity messages that might be dangerous or impossible to state directly."