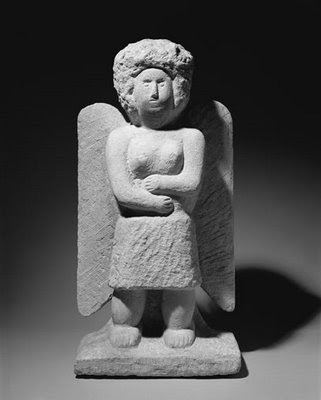 The angel of Annunciation came up today, hereabouts, and I went looking for something that might pay homage to the delight it brought me, and perhaps pass said delight along: came across this, at the sumptuous gardenhistorygirl (some blog! love it. more pics here, and of course there).
The angel, above, is by William Edmondson.
"Edmondson (1874-1951) was the child of freed slaves (his last name is the name of the farm just outside of Nashville to which he 'belonged'), and he called his sculptures miracles," notes Arcady on her blog. She's got other good info on him, here. He was the first African-American to have a one man show at the MoMA (1937). Arcady notes that Edmondson carved the sculptures "in his front yard and sold them for a few dollars along with vegetables at his roadside stand. Now they sell for six figures." She also mentions that:

"The fleeting recognition during his lifetime never affected Edmondson’s own assessment of his art. 'I was just doing the Lord’s work,' he said in one interview. 'I didn’t know I was no artist until them folks come and told me I was.' Indeed, in every existing interview with Edmondson, he consistently credited God when asked about his work and never referred to himself as an artist." 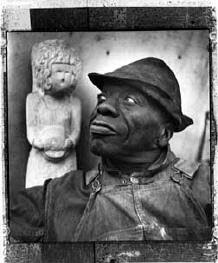