Russian Children, 1909 and The Color of Truth

It's so out-of-context to see- in shades that are true-
color photographs that are 100 years old.
We're used to the old black and white;
often gorgeous yet utterly drained of hue.
A bit of a shock to look at these and remember
that what we're accustomed to seeing
was just part of the story. The part without color.
And what might be more important than real color
for telling a true story? 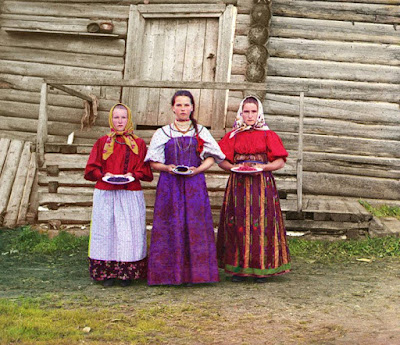 Young Russian peasant women
near the small town of Kirillov.
Photographer to the Tsar:
The photographs of
Sergei Mikhailovich Prokudin-Gorskii
(1863-1944) offer a vivid portrait of
a lost world -- the Russian Empire
on the eve of World War I
and the coming Revolution. 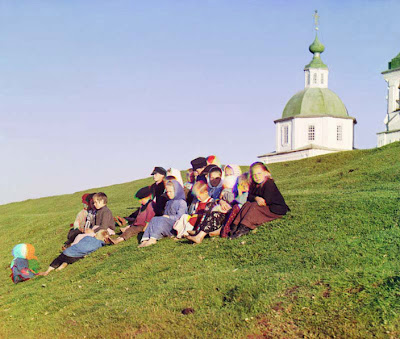 Children sit near White Lake
in the north of European Russia.

"Born in Murom, Vladimir Province, Russia, in 1863 and educated as a chemist, Prokudin-Gorskii devoted his career to the advancement of photography. He studied with renowned scientists in St. Petersburg, Berlin, and Paris. His own original research yielded patents for producing color film slides and for projecting color motion pictures. Around 1907 Prokudin-Gorskii envisioned and formulated a plan to use the emerging technological advancements that had been made in color photography to systematically document the Russian Empire. Through such an ambitious project, his ultimate goal was to educate the schoolchildren of Russia with his "optical color projections" of the vast and diverse history, culture, and modernization of the empire. Outfitted with a specially equipped railroad car darkroom provided by Tsar Nicholas II, and in possession of two permits that granted him access to restricted areas and cooperation from the empire's bureaucracy, Prokudin-Gorskii documented the Russian Empire around 1907 through 1915. He conducted many illustrated lectures of his work. Prokudin-Gorskii left Russia in 1918, after the Russian Revolution, and eventually settled in Paris, where he died in 1944."

Photos and Quotes: Library of Congress
Thanks to Mena Trott's wonderful Dollar Short:
Turn of the Century Autochromes for inspiration.