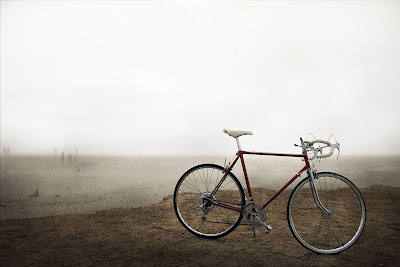 Long before fixies were cool and known by every hipster in the universe our boys were working on them (stems and tri-tools, tubes, spokes and the occasional saddle spread across the cement pad of our northern California patio) in the backyard.
That patio, actually, was a sort of smorgasbord of bikes. It was crowded, for many years, with bikes and boys and happy laughter. It was a good time.
Last night, one of the finest and oldest and most treasured of their bikes was stolen. It had been loaned to a friend for the evening, and seemed to disappear by strange happenstance. Both boys (he who loaned and he who borrowed) are sad.
I woke up this morning with a terrific headache. We'd stayed up 'til 2 a.m., had gone back to the scene of the crime, driven 'round the safe neighborhood it was being ridden in looking for the bike that had been left unattended for a few short minutes and (summarily) vanished.
My morning headache (as it mounted it's offensive and started to take over my feeling-shredded stomach) was not just about last night. Trying to dig a little deeper (the aspirin wasn't working), I realized that it was about loss and attachment. It was about (and this from a person who was born with the undesirable ability to cry easily) trying not to break into a gulping, wrenched-face sob the way a four-year old might if you'd stolen their last piece of Easter candy. So I'm sitting at the end of the bed thinking: I'm a grown woman. It was an old bike. The most important thing to do is to teach (as we always try to, I hope) our son that these things happen, they are sort of sign posts (the road of life is twisty).
But it was a beautiful, beautiful bike. And I let go a wretched sob knowing that there was going to be no other way to relieve the mini-migraine that was marching in. (It's taken me quite a while to realize that sometimes you don't need to keep all the pain in one place, that you can't; it will spread, whatever you do. Let it go or it wraps you up, a Havishamian web.)
That silly bike.
Why was it beautiful? Because it was loved.
And cared for by several people who loved each other.
And stationed, sitting right beneath our kitchen window, on the above-mentioned patio (so much of a fixture that I forgot it was there, usually).
Now I realize it was eye candy. (Clearly, the thief realized that, too; it was, reportedly, the only bike taken from a big ol' pile of unattended bikes.)
Which, surprisingly, brings me back to authentic home.
After spending a decade plus working in How Things Look, it's crept into my consciousness that How Things Look means very little compared to How Things Are.
How Things Look is ephemeral, transitory, and (often) misleading.
How Things Are is much, much more what I care about now. (I suppose what I always cared about, but I got confused. Don't we, sometimes?)
And I realized that being attached to that bike (or, in reality, being attached to the way my children loved that bike) means that it's station -- under the kitchen window -- meant Here is Love.
Because it was out in the open, and we didn't fuss and bleat and force the beloved bike to hide in the (over-stuffed) garage so that our suburban household looked catalogue-ready (it doesn't; it hasn't in a long time, perhaps it never did).
And, thankfully, as I sat on the down comforter sobbing like a four-year old, in a quick five minutes I reached something akin to a state of comfort. It was gone, we'll figure out what to do next (file a police report? Note, on craigslist, that it's stolen? Whatever). And we'll recognize this sign post for what it is.
The Havishamian web unravels. (This is how life gets better.)
Celebrate what we've got when we've got it, and know what's good about life when it's sitting right there at the kitchen window.
Farewell, Centurion. We'll miss you. We loved you.
(There is nothing better than being loved.)
image (a lovely old Centurion) found here
(will replace it with an image of the bike in
question as soon as we locate a good photo)