And how does one pay for thoughts? The answer, I think, is: with courage. 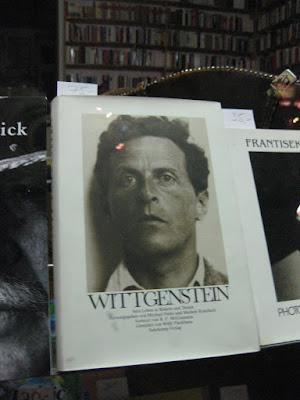 So, the other day I was supposed to show up at a printing class with a quote. Therefore, at midnight or something, I am trying to find quotes. These are all Wittgenstein (or so they say). They are all from twitter and wikipedia (so if I'm starting to look semi-academic don't be fooled). Here's what he said, in part:

Philosophy unravels the knots in our thinking; hence its results must be simple,
but its activity is as complicated as the knots that it unravels.
Aim at being loved without being admired.
You could attach prices to thoughts. Some cost a lot, some a little.
And how does one pay for thoughts? The answer, I think, is:
with courage.
Religion is, as it were, the calm bottom of the sea at its deepest point,
which remains calm however high the waves on the surface may be.
The human body is the best picture of the human soul.
To pray is to think about the meaning of life.
If life becomes hard to bear
we think of a change in our circumstances.
But the most important and effective change,
a change in our own attitude,
hardly even occurs to us,
and the resolution to take such a step
is very difficult for us.
To believe in a God means
to understand the question about the meaning of life.
To believe in a God means to
see that the facts of the world are not
the end of the matter.
To believe in God means to see that life has a meaning.
..the whole thing is as plain as a sock on the jaw!
You can’t think decently if you don’t want to hurt yourself.
I know all about it because I am a shirker.
Thinking is often easy,
but when it’s most important it threatens to rob one of one’s PET NOTIONS
and leave one BEWILDERED.
The Clement daughters here find my name difficult so they call me ‘Vicky’.
NOBODY else is allowed to do this.
My father was a business man,
and I want my philosophy to be businesslike,
to get something done,
to get something settled.

Tell them I've had a wonderful life.
(famous last words)

[i liked all of these, so i thought i'd share them. besides, i didn't need the quote when i finally got to class in my elizabeth taylor fashion- i try hard not to be late, but my brain doesn't seem to run on the same time as the brains of others. or something like that- well, we did something else in class- a good thing- and what's the use of midnight research on twitter if you don't share it, right? um. not right, probably. but here, anyway. hope you enjoy as much as i do. and yes, i already posted this quick-snapped photo from berlin. and yes, i'll probably post it again.]
with special thanks to WittTweets