The Art of Leaving Out 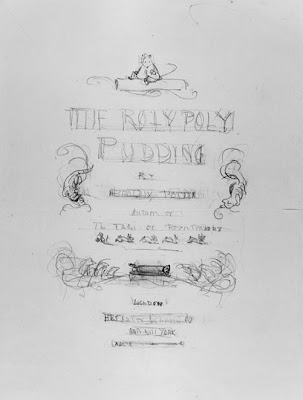 Beatrix Potter
"Even before its publication in October 1902, Beatrix Potter believed she could ‘do better than Peter Rabbit’. She was eager to interest Frederick Warne & Co. in an idea for another project – a book of nursery rhymes, ‘in a style between Caldecott’s and the Baby’s Opera’.
From childhood Beatrix was an enthusiastic admirer of Randolph Caldecott’s picture books, published by George Routledge & Sons between 1878 and 1885.
In particular, she delighted in Caldecott’s exuberant sepia pen and ink drawings, which dramatically expanded the humour and scope of his story-telling.
Although Warne had insisted upon colour illustrations for The Tale of Peter Rabbit, Beatrix suggested juxtaposing colour and line drawings in a larger picture-book format: ‘Do you think everything has to be coloured now, or can one still have part in pen and ink?’

When Norman Warne, Beatrix’s publisher and fiancé, died in August 1905 she abandoned her nursery rhyme book.
However, the larger format was adopted for several other books, including The Roly-Poly Pudding (1908).
Keen to ‘do pen and ink better’, Beatrix applied herself to mastering what Caldecott called ‘the art of leaving out’ – the ability to evoke movement, humour and expression with a minimum of pen strokes.
Her vigorous and expressive line drawings, printed in sepia in the first edition, were reproduced in black when the book was re-issued in 1926 in a small format and renamed The Tale of Samuel Whiskers."
from
"The Art of Leaving Out"
The Victoria and Albert Museum

Email ThisBlogThis!Share to TwitterShare to FacebookShare to Pinterest
Labels: Beatrix Potter, bliss, The Art of Leaving Out, Victoria and Albert